The Secret of Skinwalker Ranch: A Review 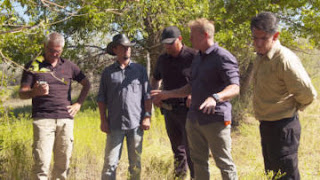 "For the first time ever, The history channel is gaining full, unprecedented access to one of the most infamous and secretive hotspots of paranormal and UFO activities on earth; Skinwalker Ranch." That is what has been claimed by the show.

Well, that is true and not true. In my research, I found that History's show, Ancient Aliens, had gained access to the ranch on a recent episode. Season 15, Episode 10, the show visits the ranch and interviews many people involved with the ranch, including just about all of the members of the cast of the current reality series. Hm. Ok, so I guess the Ancient Aliens episode was a prelude to the series?

Zak Bagans and Ghost Adventures did an episode called Skinwalker Canyon, which investigates the canyon around and bordering the ranch and focuses on the Indian tribes which used to live on the land.

In 2013 there was a full length fictionalized Hollywood movie called Skinwalker Ranch. The movie was released in theatres to mixed reviews as a Horror movie. It appears that no part of the movie was filmed on the actual ranch.

In 2018 a documentary film was released, called Extraordinary Beliefs, and claimed to have been filmed at Skinwalker Ranch.

So, that's the history of previous coverage, which is considerable, because the new show claims to, "for the first time ever, gained full, unprecedented access to the most infamous and secretive hotspots of paranormal and UfO-related activities on earth." Wow, that's quite a claim, and a bit overstated, in my opinion.

On to the new one-hour non-fiction series, "The Secret of Skinwalker Ranch." The show premiered on March 31, claiming to be the first-ever to have been allowed to bring cameras onto the ranch to film. As I said, maybe, maybe not.

The cast is from the History Channel's Ancient Aliens episode. It features a team of scientists (two) and so-called experts who search and investigate the 512-acre ranch located in Utah. Their purpose is to find out the reasons and evidence behind claims of UFO sightings, animal mutilations, (which have been debunked numerous times), and paranormal activity. In the promo, they claim to use "the latest in cutting edge technology". I have watched five episodes and I am yet to see them use any technology that I have not seen used on just about every paranormal show; emf meters, drones, balloons, rockets, ground-penetrating radar, and IR cameras and radiation dosimeters. There is nothing state of the art here, or new. It's all been used before, frequently. I'm still waiting for anything innovative.

The property was purchased in 1996 by a billionaire and UFO enthusiast, Robert Bigalow, who conducted experiments, but his findings were never disclosed to the public. Three years ago the property was sold to Brandon Fugal, a prominent businessman and real estate developer, who purchased the ranch in order to investigate the claims of unexplained phenomena.

The cast includes the following:
Travis Taylor, an engineer who holds a Ph.D. in Science and Engineering, Aerospace Systems Engineering and master's degrees in Physics and Astronomy. Taylor has worked for the Department of Defense and NASA.

Dr. Jim Segala has a Ph.D. in Physics as well as degrees in engineering. He is the chief scientist on the ranch.For nine years he was a researcher who performed experiments in quantum entanglement, optics and neurobiology.

"Dragon" or Byant Arnold, is the Chief Security Officer. He is a licensed, armed private security officer in the state of Utah and is an expert marksman.

Thomas Winterton is the Superintendent of the ranch, overseeing maintenance, facilities, and equipment, as well as overseeing activities on the ranch and assisting in investigations. He has had numerous personal UFO-related experiences on the ranch.

Jim Morse is the ranch manager. He is dedicated to serving the Native American communities, which has gained him the trust of tribal leaders to help solve the skin-walker encounter claims on the property.

In episode one, the show opens by introducing the cast as they begin to discuss how to proceed with their investigation. They sit around a table discussing personal experiences, theories, and more theories.

Eventually, they move outdoors and climb up a ridge on the property, using their meters to measure emf. While exploring the grounds, Mr. Taylor has an experience that makes him feel dizzy and disoriented. He uses the term, "swimmie-headed" to describe his state, apparently a highly scientific term I am not familiar with. . . swimmie-headed?

The team climbs the ridge and looks around. They are without equipment of any kind except some sort of emf meter; no cameras, no drones, no lights, no other technology in sight.

One of the team has had a head injury that put him in the hospital. The injury occurred on the property during some digging. Now he is sure that something weird on the property, or under the ground, has caused this mysterious malady, which he has recovered from. He forbids any digging on the land, anywhere, anytime. Ok so why are they there? If they don't have the freedom to dig, or explore, then what is the use? There is no evidence that anything on the ranch caused his head swelling. The "scientists" just sit staring at each other, at a loss as to what to do now. No digging? gee wiz.

The show proceeds, through five episodes, to do a lot of head-scratching, a lot of long, slow stares into the sky, a lot of walking to and fro. At one point they do some high school trig in order to estimate where some anomalous beeping on their radar is coming from. They then shoot a few rockets up to attempt to do some readings from there, but the rocket disappears. They also send two weather baloons up.
They catch something anomalous in the sky and declare it to be a UFO and call it "unprecedented" video. No, it's not. Do any of these guys (its exclusively guys, by the way) know just how many thousands of hours of film exist in the world, of unidentified flying objects? No?

They theorize that the anomalies could be caused by a wormhole and site Albert Einstien. Could this be a portal to hell? or a port-hole? Where's Jack Osborne when you need him?

They uncover a hole close to a building on the ranch, which appears to be an old well holding foul-smelling water. Taylor breathes in the fumes and gets sick. When he goes to the doctor he discovers that he has taken quite a powerful hit of radiation, even suffering radiation burns on his skin. Hm.

They do some scanning beneath the surface and discover some anomalies (they all love the word anomalies) in the shape of a cigar. Gee wiz, could it be? That's pretty close to the shape of a flying saucer! golly gee.

I'm sorry, respected readers, but these guys just don't seem to be much like professional, experienced, highly educated scientists. I'm not doubting their degrees or credentials, but they do not act smart. They remind me of the guys on Mountian Monsters, only with better haircuts and better clothes.

During a discussion about Taylor's radiation poisoning, Dragon says, "I don't have a F--'n Ph.D. so I don't have an opinion." He doesn't want to allow digging on the ranch because he is afraid of the Indian curse, afraid of what bad thing might happen if they dig. Does this sound like science to you? Good grief. They have discovered a cigar-shaped, huge structure underground but they are too afraid to dig. Isn't this why we are watching? I miss Josh Gates, who goes anywhere, no matter how dangerous, to any destination, to fearlessly discover the unknown.

This show also feels scripted. The conversations in the workroom especially feel false to me.
I wish this show lived up to its claim of using science and scientists to investigate the mysterious unknown, but, just like all the other paranormal shows, this one not only doesn't come across as authentic, it comes across as silly, amateur, and clumsy. I'm going to see where it leads. The shape underground could be something alien, or not. Maybe it's Steven King's Tommyknockers. Is this the team to discover and explain the mysteries of Skinwalker Ranch? I don't know. Just thinking about it makes me feel swimmie-headed.