Respect for the Dead 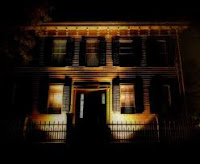 Respect for the Dead

First, I would like to give the reader a taste of what the online ghost-hunting enthusiast websites have to offer to the public in the way of ghost tours and events. This has been taken directly from an ad for a ghost-hunting event coming up this fall. I have removed any reference to who the group is, and where the location of the event is, in order to protect the…. well, people…

Night at _____
Join _____ _____ as we journey to ___, the notorious former poor farm, mental institution and retirement home somewhere in the US! During its decades in operation, it has played host to sinister occurrences and has earned a reputation as one of the most haunted places in the US. You’ve seen it on TV, but are you brave enough to experience it for yourself?

It is said that the spirits of the dead roam the property at night. _____ has played host to hundreds of visitors in recent years, from paranormal investigators to crews from television shows. They have experienced everything from footsteps to mysterious laughter to malevolent shadows and apparitions. All of the lingering presences remain from the building’s years as a care facility – and those former inmates do not rest in peace.

Among the spirits is that of a little girl who laughs, plays, and sings in the first floor hallway and the spirit of a man who allegedly committed suicide in one of the janitor closets. In a first-floor room where a brutal rape occurred, an uncomfortable presence can be found. Footsteps roam the building, tapping away into the night. There is an apparition of a woman dressed in white who has been seen on countless afternoons, standing on the second-floor landing. She vanishes without explanation. There is a toy fire truck, left abandoned in the building, that moves through the building on its own. The building’s stairway doors slam shut of their own accord.
Perhaps the most infamous spirit is one that has been dubbed the _____. Said to inhabit the basement, it wanders between rooms, paying special attention to the boiler room and a small padded cell on the opposite side of the building. The stories say that this spirit is that of a man who was confined to that cell and ended his own life there. He is said to be tall and slender and possessing a malevolent expression and personality. He has been seen, heard, and experienced, including a violent incident when dishes were thrown to the floor.

_____ can be an unsettling, sometimes terrifying place and its not for the faint of heart. Some visitors cannot make it through the entire night in the building, but if you think you can, we invite you to come along with us as we explore this chilling location for ourselves.

Ok, so there it is; the gist of my problem spelled out clearly and explicitly in this ad. When did we begin to treat the dead, and locations inhabited, in theory, by the dead and restless spirits of the suffering and miserable, as amusement park rides?  If, as many believe, these disturbing places are haunted by spirits of dead people, dead people who are stuck due to their extreme suffering or extremely evil behavior, then why do we feel we have the right to exploit them for our amusement, and, even worse, our profit?

In this location we have a place that was used as 1. A poor house, 2. A mental institution, and 3. An old folks home. These are poor people, mentally ill people and the elderly. If, as many believe (and I reserve judgment on that myself), these people are either stuck in this location where their suffering took place, or they choose to stay there to right wrongs or, well, who knows why, then we want to talk to them, experience their presence, even provoke them to throw something, bang on something or move something. Why? So we can experience the thrill, the chills up the spine, the invisible, for our amusement, for our own personal thrill ride, so we have a scary story to share on face book.

Or, maybe people go to these places because they do not believe in an afterlife, or ghosts, and they want to prove, or disprove their beliefs. They want their evidence.

Think about this for a minute. Here, we have a little girl ( do you have a young daughter?) a man who committed suicide (do you have a friend or loved one who had left this life in this way?) and a female who has been brutally raped (have you a friend who has been raped? Have you?). What these people are selling you, for $65 a night, is the chance to experience these suffering spirits for ourselves, for our amusement.

That’s the gist of my problem. I don’t have a problem with these haunted locations being the site of a respectful, professional, scientific and serious paranormal investigation, in order to get evidence of the paranormal.  The problem I have is when it is for profit, or for fame, or for a night of amusement and thrills, adventure and fun.

I find it disgusting and disrespectful.

But this appears to be the age of disgusting and disrespectful behavior; selfish, self centered, insensitive creatures.  Be them dead or alive.

I am very aware that this would mean the shutting down of, what has become, an entire industry of ghost tours, haunted location events and group enthusiast "investigations." So be it.

What do you think?