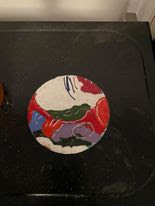 Here is his first description: I’m getting round, khaki or grey brown, rough, a series of holes, and a swirling pattern I kept seeing a clay vase 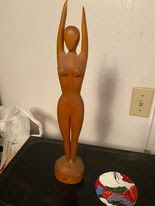 I set both objects beside each other, they were not separated. Pointy, blue, peach color, circular, lots of empty space 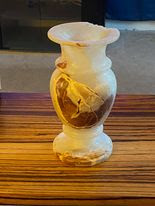 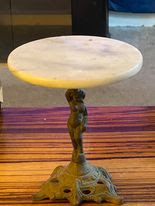 In the first description, the brown, khaki or grey clay vase is a pretty good description of the brown wood figure. The swirling pattern of the second object is accurate, amazingly so. The second description is spot on accurate in detail, all except the color blue. The third description is again, very accurate except for the "diamond screen". This ability is meant to be used to communicate with UFOs. But I think this result is astounding. I hope to get lots of feedback and comments on this article. Your opinions and comments are welcome. Note: The google blog program, which I have beenn using for ten plus years, has suddenly become nearly unworkable. So, I apoligize for the lack of paragraphs, spacing, and captions under the photos. The program just kept jamming all the text together as one long paragraph in small font. I am truly sorry. The information for this article was gleaned from Dr.Greer's movie, CE-5 and the actual CE-5 protocols, which have been published online in multiple places and sources. Other information has been generously provided by my son,including the remote viewing experiment.